I used to own a 1974 Opel Manta, and it had some wiring gremlins.  I was already a software engineer back then, and sometimes when things are enough of a mess, it’s time to rewrite the source code.  So, for similar reasons, I decided the Opel could use some basic rewiring.

I never completed the project, but in the course of it, I came up with some fresh ideas of how a car’s electrical wiring could be really great.

When I was nineteen, a friend of mine offered me $100 to rewire his entire car, every wire in the vehicle to be replaced with a fresh wiring harness.  This was on a 1972 South African spec Renault 16 TS. I agreed, and spent the next three days regretting it.  So, I have a pretty in-depth opinion about cars’ electrical wiring.

Owning a few Volvos, and dealing with a friend’s Pontiac, helped me form the opinion that many cars have the fuse box located in a place that necessitates kneeling by the side of an open front door and peering at dark recesses. The Volvo fuse box is fairly near the door opening, so it’s not as bad. On the Pontiac, I learned some new contortionist’s skills in order to reach the fuses.

On my 1992 Ford E150 van, the fuse box is named “Power Distribution Box.” It’s in the engine compartment. Working on it is a lot easier than lying face-up below the dashboard, but it’s still sort of awkward to reach down and work with the fuses and relays.

What would be a really great design, I ended up concluding, would be a fuse box that contained the fuses and relays in an easy-to-get-to place where I didn’t have to lie down or stoop or kneel.  Perhaps they might even be in a little box with a cool clear plastic lid.  Wouldn’t that be SO cool? 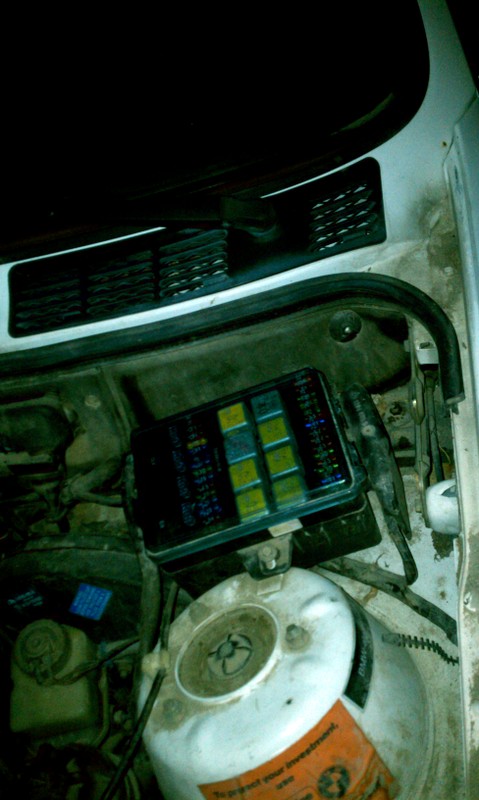 That is precisely what BMW did with the E30.  When I first saw this design on an E30 car, it was almost like dreaming about some futuristic contraption and then seeing one in real life.  I was delighted.  Since then, I have been grateful for this design many times, including as recently as tonight.  Working on the fuse box of an E30 is, comparatively, a delight.

Kudos to Claus Luthe, the late designer of the E30.