I own and manage a small car company that I founded with a focus on the ZF 4 HP-22 transmission.  ZF came out with it in 1984 or so.

ZF is an acronym for Zahnradsfabrik Friedrichshafen, which (since German was my first language) I happen to know translates to “The Gear factory in Friedrichshafen.”  That’s not exactly a catchy name, but ZF has become recognized as a company that makes some very good products.

BMW, another respected company, tends to buy many of its products from high-quality vendors like ZF.

Before the ZF 4HP-22 there was the 3HP-22. This was a nice, strong three-speed automatic transmission that served well in BMWs up to and including the 1983 model year.

BMW mated the 3HP-22 up to its classic M30 engine, its venerable straight-six that in various guises has been powering its top-of-the-line models since the late 60s, in the 2500, 2800, 3.0 L, 3.3 L, the Bavaria and the 2800 CS, 3.0 CS and 3.3  CSL models.  The 5-series had it, then the 6-series, then the 7-series.  It was the most popular engine by far for high-end BMWs in the 1970s.  Nearly indestructible unless you overheated it and warped the aluminum head, the chain-driven overhead cam engine is powerful, smooth, quiet, nicely fuel-efficient and so clean-burning that BMW didn’t go to catalytic converters until 1981 or so, whereas most automakers were already doing so of necessity by 1975.

I own a 1992 BMW 735i (the one on the right, in the picture).  Ever since I bought the car five years ago, the M30 engine therein has helped me enjoy tens of thousands of trouble-free miles, some of them at speeds that make me hope the Highway Patrol doesn’t read this blog.

However, its successor, the ZF 4HP-22, was a thing of true engineering beauty.  It was a four-speed automatic transmission in an era when this was highly unusual.  And, better yet, it had a lock-up torque converter.  This meant that, at 60 mph or so, the torque converter stopped acting like a slushbox and became a hard, mechanical link between the engine and the rear wheels, like a 5th gear.  Fuel economy and responsiveness increased accordingly, in that mode.  It was a transmission that provided the benefits of an automatic transmission and yet some of the compelling benefits of a stick shift: 5 forward gears and no loss of power or fuel economy, in 5th.

You would think that to manage all the torque and power of BMW’s big-six engines, the transmission would have to be pretty hefty — especially when we ponder that some owners improve their BMWs to be far more powerful than the factory made them.  That’s pretty impressive when we consider that the stock M30 engine has enough power to propel my 1992 BMW 735i to 141 miles per hour (don’t ask how I know this).  With far more power yet, that’s a lot of strain to put on a transmission.  And yet, the ZF 4HP-22 is tiny.  Without the bell-housing or tail-housing, the entire transmission weighs less than 70 pounds.  You can actually ship it UPS.  I know this because I’ve done so.

I first enjoyed this transmission in my 1984 BMW 633 CSi, and for once, the M30 engine was in danger of being upstaged.  The transmission was a delight.

The ZF 4HP-22 has a little metal plate on the driver’s side, just to the rear of the shift linkage.  For BMWs (and probably not just BMWs) the serial number implies the year and model car on which the transmission was installed at the factory.

Volvo also liked the ZF 4HP-22 and used it in its 740.  When the ZF 4HP-22 in my 1984 BMW 633 CSi died, I went to a junkyard and pulled the ZF 4HP-22 from a Volvo 740.   After swapping the bell-housing and tail-housing, the Volvo transmission works fine in my BMW. It has been behaving there for the last 10 years or so.  It is, simply, just one more ZF 4HP-22.  I presume that some of the shifting optimizations vary, but … close enough for me, anyway.  In ten years of happy ownership, I haven’t noticed any issues with that.

Land Rover, Alfa Romeo, Jaguar, Maserati, Peugeot, Mercedes-Benz … these companies all chose the ZF 4HP-22 for some of their models. 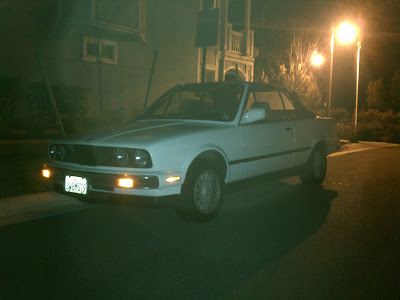 So, today, I (with a wonderful friend and colleague, who did most of the work including, literally, the heavy lifting) pulled the ZF 4HP-22 out of a 1992 BMW 735 at a local wrecking yard.  And, when we’d worked in it for 6 hours or so, it occurred to us too late that we should drain the fluid.  When we did, it was pitch black and smelled like burnt popcorn.  This means the transmission is most likely bad, and that’s probably why the previous owner unloaded the car as such.  We nevertheless finished removing it from the car but I didn’t buy it.  The mood was somber.

Around 2 p.m. we started working on a 1987 Volvo 740, which had that same type of transmission.  The Volvo was a joy to work on after the complexity and tight space of the BMW.  By 4:30 p.m., we had the transmission out, albeit with a new hole in the oil pan because we let it drop on a sharp object.  By 5 p.m. the deal was done and I now own a replacement ZF 4HP-22 (whose oil pan I need to replace).

For reasons that I plan to explain in the future, I avoid buying the ZF 4HP-22 transmission unless it comes from a 1987-or-later car.

Next, I need to go buy a 30mm socket with which to remove the large nut at the back of the tail-housing, so that I can swap that and the bell-housing and shift lever, to convert the transmission from fitting a Volvo to fitting a BMW.  On the 3 HP-22, removing the bell-housing made some of the internal parts come loose, oops.  On the 4 HP-22, I’ve seen no such problems.

In the near future, I plan to document some more details about today’s removal process.