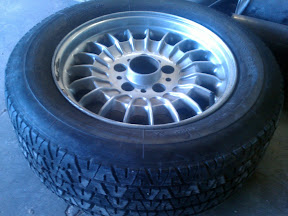 As I have pieced together the story based on hearsay, the Michelin company offered to the market a cool new tire technology that addresses a major problem with performance tires: sidewall distortion under heavy cornering (in other words, the tire tread points elsewhere than where you’re directing the wheel).

Here’s the better version of the story, from Wikipedia:

The Michelin TRX is a radial tire introduced by the Michelin Group in 1975. Its introduction as the first “low profile” tire marked an advance in tire technology.

TRX tires require the use of wheels that were specially mated to the tires; standard tires do not fit TRX wheels.

In due course tire technology caught up with the TRX line, and TRX tires are now produced only as special-order replacements for vehicles which were originally fitted with them.

The first “low profile” tyre
The invention of the TRX by MICHELIN in 1975 permitted a more even distribution of tension in the whole tyre casing, which is where the name of TR standing for Tension Répartie (“distributed tension”) comes from. The TRX won renown in Formula 1 racing with Renault and Prost and in the world rally championship on the Audi Quattro, 205 Turbo 16 and R5 Turbo.

The result of extensive research…
For the first time, the tyre and its rim complemented one another perfectly, working as a single unit. The rim underwent a fundamental transformation, the essential characteristic of which was a flatter, lower flange. This new design of the rim and tyre bead resulted in a gradual curvature of the casing, without the “S” shaped flexing inherent in traditional designs.

…for real directional control
Thanks to this innovative construction, the TRX tyre offers better directional stability and makes a great contribution to the active safety of the vehicle, thanks to its exceptional handling close to the limit, especially when cornering.
– remarkable grip thanks to the ideal distribution of pressure in the contact patch.
– excellent comfort due to the increased useful flexing zone
– New look to the tyre/wheel assembly and the heavily sculpted tread pattern.

The Era of Car Safety.
The 70’s saw the dawn of increased awareness of the importance of vehicle safety. In many countries it became compulsory to wear seat belts and speed limits were introduced on main roads and motorways.
For the tyre, this led to improvements in grip, more precise steering, increased stability and better levels of comfort, thus avoiding excessive driver fatigue on long journeys.

All these cars (and many others) had the Michelin TRX fitted as original equipment, and still can today, with a tyre true to that era, but manufactured using today’s techniques and materials.

Many tire  manufacturers have addressed this problem with ever-narrower (and in my opinion, odd-looking)  sidewalls on tires, and with a resultant decrease in ride quality because there is less space in which to deflect bumps.  Perhaps Michelin had a better idea all along, with the TRX.

I have seen TRX tires and rims on mostly the 6-series of the mid-to-late 1980s though I’ve also seen them on 5-series and 7-series cars of that vintage. Visually, I consider the rims and tires to be very pretty.

Structurally, the tire was equally unusual in that it only fitted on 5-lug BMW alloy rims specifically made for this tire.  More problematic to owners, in the long run: such rims could take only the Michelin TRX tire.

Sadly, instead of becoming an industry standard, the TRX ended up being discontinued by Michelin. Owners of the TRX-specific rims had three options:

A specialty tire company (Coker) presumably bought the rights to TRX tires from Michelin and now makes them.  Here is a quote from their website:

Standard fit on many performance cars of the ’70s through the early ’90s, these purpose-built Michelin TRX radial tires are available through Coker Tire. The TRX radials from Coker had the bead altered to suit a new rim design, producing a more gradual curvature for directional stability and handling with a comfortable ride. Coker Michelin TRX tires are built in authentic molds for perfect fitment to your wheels. So, if you need to mate your TRX wheels to new tires on your European car from the late ’70s or a Mustang from the ’80s, look to Coker for their Michelin TRX tires.

As to safety, I have read some strong opinions that tires older than x years should not be driven on.  It could be that the used TRX you might be buying was the original spare in a car that was new in 1986.  It’s unlikely that the tire has aged gracefully.

Could be that you want a set of TRX tires because you’re going to be driving the car only onto a gold course for concourse events.  Could be that you’re going to only be driving it down a country lane at 15 mph on Sunday afternoons.  Could be that you’re planning to drive it at triple-digit speeds down an alley in the freezing rain.   Presumably you’re a mentally competent adult and you can make your own decisions as to how old a tire it makes sense to stress under which conditions.  I’ve personally had a set of used not-that-great tires up to 138 miles per hour on the German Autobahn, but I chose to drive at that speed on those tires for only a short period of time.  You might be more risk-averse, or less so.  It’s your decision.

I’ve done a bit of reading on the subject, and I wasn’t surprised to learn that the mainstream news has interviewed someone they consider an expert, who flatly asserted that some of other magic age (6 years, as I recall) is the universal cut-off, and that any tire older than that should never be used.  I can imagine the interviewer nodding thoughtfully while hearing this oversimplification and treating it as wisdom, and perhaps saying some or other endorsing platitude in response.  I wouldn’t be surprised either if some folks have tried to get some or other law passed to that effect.  To his credit, an industry spokesman pointed out that it’s not quite as simple as all that, and that there are many variables to consider.

I leave that decision to the buyer, meaning: I sometimes do come  across used TRX tires and I do buy them and I’m fine with selling them to you.  On a personal note, I happen to drive a mid-80s 6-series BMWs on (presumably old) TRX tires and so far I’ve been fine.  I also own a  mid-80s 535i that I drove on (presumably old) TRX tires for 250 miles that included a winter storm in the Sierra Nevada, and I didn’t have any problems.

If your choice runs towards buying used TRX tires, I hope you exercise prudence in how you use them, so that buying them is truly better than spending more than $1,800 to $2,000 for  set of new TRX tires.

I sometimes come across, and buy, rims for 5-series, 6-series and 7-series cars that are not TRX rims, yet are orginal BMW equipment.

These might be pre-TRX era rims, or post-TRX.  I offer both of these for sale.  With these rims, you get to go to your local tire store and buy industry-standard tires from a variety of brands and at the fraction of the price of a set of new TRX tires.

Based on an entry on the Bimmerfest forum, the technical specs for this wheel, or replacements for it, are:   a 5×120 bolt pattern and a 72.5 center bore.

Keep in mind that these are used rims, and they might have been subjected to their share of curb scapes and potholes.  They are, I hope, good enough and I hope you inspect them well.

With less enthusiasm, I sometimes come across, and buy, rims for 5-series, 6-series and 7-series cars that are neither TRX rims, nor orginal BMW equipment.

As a matter of personal taste, it’s rare that I’ve been able to generate much enthusiasm for the look of non-BMW rims but it could be that you love the aesthetics of some of the rims I offer and it’s also your ticket to independence from needing to keep buying TRX tires.

It’s ironic to me that I’m offering this in the context of my 3-series parts business, even though it’s not a part for the 3-series cars.  It just happens to be a high-demand item for which I have occasional solutions.

The only condition under which I’m willing to sell used tires or rims is if the buyer assumes the risk.

Please contact me to learn what I have in stock and at what price.