We installed a new water pump on a 1987 325, and didn’t much like how thin and wavy the gasket was.   Still, we thought we’d gotten it into position well enough, and we installed the water pump and put together whatever goes on top until we could crank the motor.

That’s a lot: all the drive belts, the camshaft belt cover, the fan pulley, the fan and the radiator.

When we poured in coolant then even without the engine running, the coolant leaked out.

We discussed the issue with a smart BMW repair person and he mentioned that the thinness of the gasket isn’t the problem. He suggested we find what else is wrong.

Once again, we removed all the parts that were in the way of the water pump.  We removed the water pump, and found that the flimsy gasket had slipped out of position so that it was in the impeller space. This had created the leak. Here is a picture: 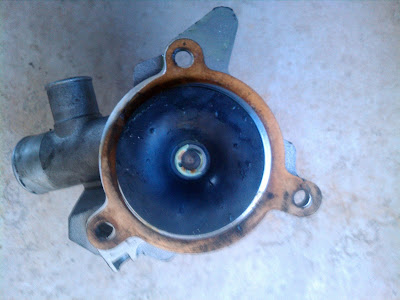 We bought a new slightly thicker gasket for $2 or so, plus a gasket scraper and some silicone-based room-temperature vulcanizing (RTV) glue.

The new gasket went on, with some RTV glue, and the three 13 mm water pump attachment bolts were torqued cheerfully tight.

We attached the various water hoses to the water pump and tightened their clamps. 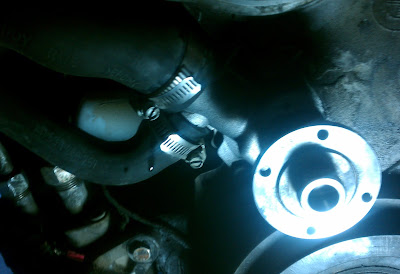 We filled the coolant overflow reservoir with water to put pressure on the seal.  It did not leak.

This test is a good time-saver when there actually is a problem.  Otherwise, time invested in bolting on other components will be doubly wasted if they have to taken off again, if we later find out that the water pump does leak and does have to be removed again.

When doing this test, it’s a good idea to pour in water carefully when the level reached the coolant outlets at the top of the head, or water will spill out of there and make it hard to discern whether a drip was caused by a leaking water pump or the abundance of water pouring out.