We recently removed the sub-frame from a 1987 BMW 325, with the suspension, transmission and engine accompanying it.

Having the engine out in the open made it a relatively pleasant task to swap out the timing belt and water pump, with the parts being out in the open and so readily accessible.

Unfortunately, after we put everything together, we discovered that the water pump gasket had a leak, and so we need to remove many parts so as to remove the water pump again.  We were not going to remove the sub-frame again, but we also didn’t like the prospect of working on the front of the engine in tight quarters.

So, my contractor came up with a clever plan.  He removed the radiator, air conditioning condenser and grill, and then he had far more convenient access to the front of the car. 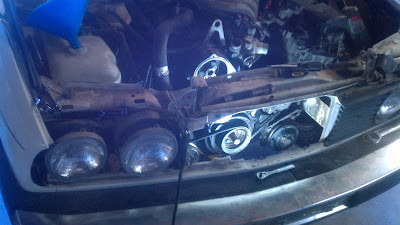 The fact that there was no refrigerant in the car’s air conditioning system helped, or we’d have had to deal with that first.