If someone has yanked too hard on the glove compartment, they can damage this plate.  I offer replacement units for $10.

At the front of the dashboard, at the lip of the opening made when the glove compartment swings down, the plate screws into the dashboard with two Philips screws.  The plate also has an inboard 10 mm bolt, about 6″ forward of the two screws.  This bolt goes vertically up into the car, for extra positioning. 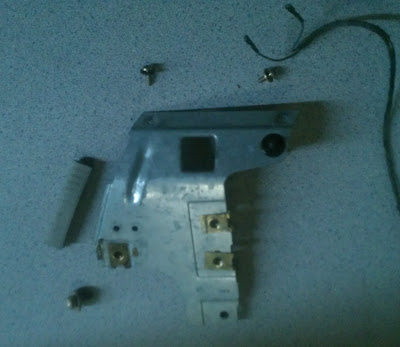 The plate also holds up the inboard portion of the base of the fuel injection computer, and it attaches to this using two more such 10 mm bolts that go vertically upwards.

Some plastic trim, about 3″ long, slides over the inboard edge of the plate to prevent its sharp edge from chafing and eventually cutting into nearby wiring.