Here is a made-in-2018 update on our latest technical understanding after selling several front & rear aluminum bumpers and related parts for the BMW E30 3-series.

If you’d like to buy a rear-bumper part, use this link.

We enjoy having an in-depth understanding of what we sell, not least so that our customers are more likely to end up receiving the correct part for their car.

Then, we took each bumper apart as much as feasible, which resulted in many smaller parts and some useful insights. It was a fascinating journey into how these cars evolved over the years.

In 1984, the initial US models came out with an aluminum bumper. This continued through:

After that, the bumper was a wrap-around plastic design for a more-modern look albeit with internal metal reinforcement. Even though the plastic bumper is also in high demand, this article focuses on the bumpers that consist mainly of a large aluminum beam. Some people are interested in converting from the aluminum bumpers to the more-of-an-Euro-look plastic bumpers — more on that later. 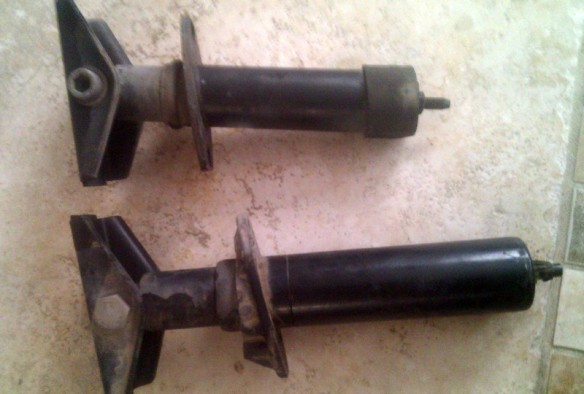 The bumper is attached via an angle bracket to a shock absorber, on each side of the car: driver side and passenger side.  Each shock absorber is in turn bolted to the body of the car.

The shock absorbers are the same for the driver side or the passenger side.

The same basic design approach is used, front and rear — not to imply that the parts are interchangeable front to rear; they are not.

The rubber impact strip runs along the length of the aluminum section, and can extend slightly beyond on each side.

In front, the bumper has integral amber indicator lights that also serve as parking lights.

The rear bumper has no lights integral with it.

It seems reasonable to assume that the 1988-and-on models have a narrower strip since the gap is narrower due to the shorter shock absorbers, but I have not personally verified that as yet.

Front and rear, driver side and passenger side, is a corner bumper extension that goes from the wheel arch to the bumper without being attached to the bumper.

In the rear (and possibly the front, I haven’t verified that) the bumper extension attaches to the bumper-to-body-gap rubber strip.

Integral in each bumper extension is a side marker light. The style is identical, front to rear, though the color of the lens differs: in the rear, red; in the front, amber. The picture below shows the part on a 1986 car, at the driver side rear: 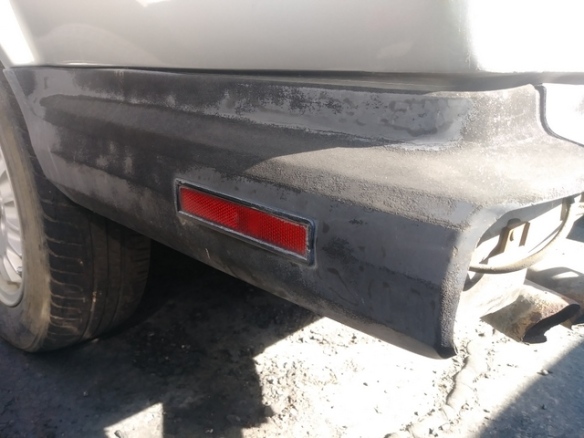 Notice how UV-damaged the plastic is in this example, after 30 years in the sun.  The original finish was smooth.  Well-preserved used bumper extensions are very hard to find nowadays.

The style changed, going into the 1986 model year:

As a result, the pre-1986 parts are different for the light and the bumper extension, both.

On pre-1986 models, the less-slim, more-rectangular light assembly consists of:

On 1986-and-on models, the slim, narrow light assembly consists of:

On all E30 models, the only difference between the front and rear lights, and lenses, is the color of the lens: amber at the front, red at the front. And, driver side and passenger side parts are identical.

On our 1991 convertible, the bumper extensions as well as the bumper-to-body-gap rubber strip seemed to have been factory-painted the same color as the car’s body. We know this because we scratched the white paint off the back of the part of our white convertible, and we found the underlying plastic to be black, and with the same part number as the 1987 car’s black plastic part.

The fasteners on the newer car are no longer a simple bolt-and-nut affair, but a more exotic Torx-type fastener. That’s probably the reason why the newer car has a large hole drilled into the bottom of the aluminum bumper base, so that the large fastener can be accessed as such. Apart from these holes, the two aluminum bases for the front bumpers seemed to be identical between the two cars.

The rear bumpers on the later aluminum-bumper E30 convertibles, such as the 1991 model, don’t have the large hole drilled in the bottom of the bumper. So, the rear aluminum sections are identical across all models that use them.

In front, a big bronze-colored steel plate can be lifted away once the shock absorbers have been removed from the bumper base. I assume the plate helps distribute the energy of the impact. The plate seemed to be identical between the two cars.

In the rear, I have found no such plate.

Whether front or rear, the bumper attaches the shock absorber base to the body of the car with a pair of 13 mm bolts, two per shock absorber.  Undo the bolts and give the bumper a firm yank forward, and it comes completely loose.  Before doing this on the front bumper, it’s essential to have first unclipped the wiring to the indicator lights.

In front, each integral light attaches to the bumper with some 10mm nuts that thread onto studs. I found these difficult to remove. I would recommend soaking the 10 mm nuts in penetrating oil first, otherwise the embedded head of the studs might shear free and turn with the nut.

The integral light has a lens that can be removed with two Philips screws to reveal a two-filament light bulb with a bayonet-style base.

To remove the bumper extension involves (in the rear) the removal of several 8mm and 10mm nuts and bolts, including one inside the wheel-well, one at the bottom of the extension, and at least two inside the trunk, thus necessitating that the felt liner first be moved away from the inside of the rear quarter panel. The extension in the front is less complex to remove.  But, for both, I recommend first pre-soaking the fasteners in penetrating oil.

One of our customers chose to upgrade his pre-1988 car to the 1988 look, to be more European in style, in that the bumpers would not quite as far, diving-board style. The project seemed logical to me, and I didn’t have any reason to believe it wouldn’t work. I didn’t hear any bad news from the customer as such.

Someone else pursued the shorter-shock-absorber look by drilling a hole into each of his pre-1988 shock absorbers and then collapsing them so that the oil inside ran out, and the part collapsed to a shorter length. Although this achieved the desired look, it made these parts unable to function as shock absorbers any more — not an approach I would recommend.

Many E30 owners prefer the plastic-bumper look as used in Europe, and in the US after 1988 (except for the convertible, which only got that look starting in 1992 or so). I have never done such a conversion, but the Pelican Parts BMW E30 Bumpers and Grilles article by Wayne R. Dempsey & Robert Bowen states:

If you have an early E30 with metal bumpers, it is possible to swap to the later plastic bumper covers. The front is a nearly direct swap, but the rear, depending on the year of your car, can be very difficult. The reason the swap is difficult is that all 1988-up E30 models (and all cabriolets) have a different (smaller) rear wheel arch. Only the later plastic bumpers fit these bodies properly.

Also, how safe or legal either of these modifications are, I don’t know.

The bumpers on these cars are aluminum, but they have been clear-coated. Once the clear-coat starts to peel or gets cloudy there is no way to simply polish the bumpers. You would have to fully strip the clear coat from the bumpers and then polish them, then apply a protective sealant or clear coat. If you were to strip the clear coat (either chemically, media blasting or sanding) and re-polish the bumpers, we could offer you a clear lacquer paint (the same as you would use on the body, for a two stage color-clear paint finish) in a convenient spray can.

At the time of this writing, I haven’t as yet tried this but it seems like a good idea.

Using it Upside Down

One of my E30 rear aluminum bumpers is badly scratched on top, yet the bottom looks decent. I was tempted to use it upside down. My tech and I analyzed the bumper. As to the general structure, that could work … but the top side edge is beveled and the bottom side is not.  It’s not a huge issue but it does mean that the top and the bottom are not absolutely identical.

We cheerfully offer used E30 front and rear aluminum bumpers for sale, and so do many other people, but there’s an extra step that we recommend be done, with the main focus being on being able to tell a good part from a not-so-good part.

Buying a part that already has the rubber impact strip attached might be a mistake.

I recently had a customer who desperately needed a bumper, and I didn’t have any in stock, so I bought a used part to pass along to him. It seemed to be in great condition until I removed the rubber impact strip, and saw some stress cracks that had been obscured. The bumper looked OK until the strip was removed. It might also look OK on the car, with the strip over it, but in an accident it might well be less safe.  The picture below is for an E28 bumper, not E30 but the principle applies.

I’m not implying there’s anything inherently wrong with the bumpers; I’m sure this damage happened due to a previous owner subjecting the bumper to an impact.