This story is based on some embarrassing real-life events. [At the time of this writing] I’m in the process of re-installing an engine and transmission into a 1987 BMW 325 (a.k.a. E30). I’m not doing this alone; someone else is doing the “heavy lifting.” Me, I’m reinstalling the glove compartment a.k.a. “glove box.”

I feel sort of silly wrestling with this thing while someone else is wrestling with the far-more-important task of attaching the steering column. Still, the glove compartment is part of the project. And, it has become, for me, an amazingly complex part. 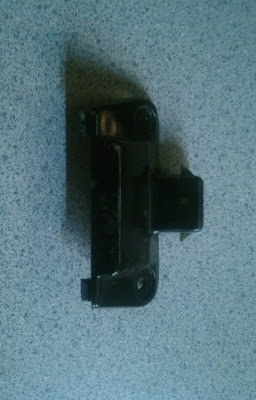 The glove compartment units I offer don’t come with the cool little rechargeable flashlight that the car came with. These seem to no longer be available from Pelican Parts or the dealer.

A few owners have posted threads of where to still find these, used, and how other models’ flashlights also fit. A few threads cover how to replace the batteries with modern ones, and some others yet cover how to upgrade these flashlights to bright, modern LEDs. One cynical owner, whose thought process I like, vowed to go yank the fuse that enables the rechargeable flashlight because he didn’t want to have one more thing that drains the main battery when he parks the car for long periods of time. I am secretly hoping that this circuit is powered on only when the ignition key is “on” but if not, he has a point. Several owners expressed disappointment at how lame the battery is after a few years’ use, i.e., even when charged, for how short a period of time the flashlight has power.

This is one example where new tech is really better. I’m tempted to go buy a used, dead glove compartment flashlight from a junkyard, and a $5 LED flashlight from Walgreens and then dismantle both and make a hybrid solution. The batteries on LED flashlights last for so long that the entire recharging premise might be a moot point too.

The straps both happen to be identical; the inboard and outboard ones. If you do remove them, it’s a bit tricky. Where they attach to car, i.e., by the top of the strap, there’s a plastic anchor. Grab it and twist it 90 degrees. Then, pull the entire strap up, through the hole into which the anchor fits.

With the cosmetic cover plate installed, it’s a lot easier since that helps push the fuel injection wiring up.

By now it’s a few months after I wrote the main article, and I’m about to send to a customer a glove box that I pulled out of a 1987 BMW 325i. The problem was that the glove box had … spots on it: light gray spots that would not wash out.  I tried and tried, with Simple Green — no effect.  My clever mechanic suggested I use starting fluid to get the spots out.  To my surprise, that worked: starting fluid following by Simple Green followed by Armor All Cleaning Wipes (not the make-it-shiny-stuff, the make-it-really-clean stuff).